On 19. August 2016 the Danish Parliament passed a resolution for Denmark to meet a request from the Organization for the prohibition of Chemical Weapons (OPCW) and the UN to help the Libyan unity Government transporting the last remnants of Libya’s chemical weapons for subsequent destruction in a country outside of Libya.
The political and security situation in Libya is very turbulent and unstable. The aim of the operation was to ensure that substances for chemical weapons did not fall into the wrong hands and thus could be used for terrorist attacks both inside and outside Libya. In addition, this was also a helping hand to Libya to comply with the UN Convention on the ban on chemical weapons, which Libya joined in 2004.

This was the second time the world community, through the United Nations and the OPCW, asked Denmark for assistance for the disposal of chemical weapons in

one of the world’s trouble spots. In 2014, it was also the Danish defense that took lead on at a similar operation (RECSYR) with the disposal of chemical weapons from Syria in close cooperation with Norway, United Kingdom, United States, Russia and China.

In Denmark we are proud of the fact that our defense is capable through a professional and properly functioning Navy, supported by components from both the Army, Air Force, the Danish Emergency Management Agency and Customs– at very short notice – of supporting an important international mission on behalf of the World community.

For obvious reasons the focus of the Media has been directed against the military part of these operations. However, the effort with the disposal of chemical weapons also reveals a success story of public-private cooperation worthy of attention. Not least because it is one of the preconditions for the positive Danish profile in the implementation of such a meaningful international operation. 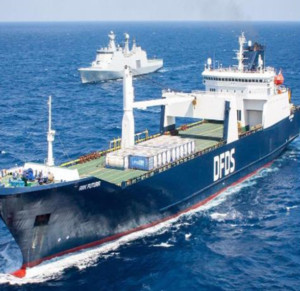 Cooperation between the Navy’s flexible support vessel “Absalon” and DFDS ‘ “Ark Futura” is truly an expression of a public-private partnership that is more than a just a platitude.

Civil Danish flagged merchant ship, DFDS ‘ “Ark Futura”, is the ship, which carried out the transport of the chemical components from Libya. The same was the case when the Danish Armed Forces removed the chemical weapons from Syria. The ship is chartered as part of the military’s so-called ARK project which, in addition to “Ark Futura”, possess “Suecia Seaways”, “Britannia Seaways”, “Germania” and “Ark Dania”.
The Ark project was established in 2003 as a Danish contribution to the NATO initiative to, among other things, enhance the Alliance’s ability to deploy military capabilities both inside and outside the Alliance area (Prague Capabilities Commitment). The Ark project was developed in close cooperation between the then Defence Command Denmark and the Danish Ship-owners Association and the Maersk Broker K/S.

By taking advantage of the high-profile position Denmark holds within shipping, the project aims to make a significant contribution to the Alliance as well as to give Danish Defence the strategic mobility, which maintains military relevance. Depending on actual threat assessment and the Danish interests –The Danish Defence is ready for deployment within as well as outside the borders of the Kingdom.

The establishment of the Ark project recognizes that no major military operation can be carried out without the bulk of the logistic, vehicles, tanks and other equipment being transported by sea. Last but not least, the decision of chartering civilian ships under full-time Danish flag was taken because the Defense Command Denmark, when reviewing the previous ad hoc chartering of merchant ships, realized that the price of chartering rose and almost became unaffordable when the maritime market expected an increased demand caused by major military operations.
The overall principle for the Ark project is that the Danish flagged ships can be taken on full-time charter by the military, but are returned back to the company, when ships are not used.

This partnership ensures the Danish Defence full right of access to the ships within the agreed-upon notification, and the shipping company is operating the ships in the normal business when not engaged by the military and thereby reduces the total cost. By establishing the Ark project, the Danish Defense secured that the transport capacity, often provided by other nations through costly military investments in the construction and operation of ships, instead can be provided in a partnership, taking full advantage of the Danish merchant fleet’s expertise in the field of maritime transport.
The cooperation with the Danish merchant fleet in the frame of the Ark project is one of several reasons why the Danish Armed Forces is able to deliver a remarkable operational output in considering the resources used. In 2006 Germany stepped in as a partner in the Ark project securing that the Ark project is one of the relatively few successful capacity-enhancing multinational projects within the framework of NATO.

Ships for the Ark project are acquired via calls for tenders. From the very start of the project, DFDS has been a central partner for defence by winning most of these offerings. The trusting cooperation between the Ark project and DFDS enabled the armed forces, in connection with a non-Danish military contribution, to the fight against Ebola outbreak in West Africa in 2015 could while also providing “Ark Futura” as a separate contribution. In a national perspective, climate change and the improved opportunities to be present in the Arctic part of the Kingdom of Denmark call for increased demands on the mobility of the Armed Forces. By having access to maritime lifting capacity the Danish commitments in the Kingdom can be addressed properly. The same applies within the framework of NATO, where more stringent requirements for removable military forces on a high alert and follow-up action also calls for a maritime lift capacity.

At the same time performing national tasks within Kingdom of Denmark, the Danish and NATO needs for mobile and deployable military units that can be deployed must be satisfied.

Denmark has a Defense furnished with a set of tools, and it is therefore of crucial importance that we have the preconditions in order to utilize these tools where they are needed, whether it will be at home within borders of the Kingdom or elsewhere in the world. The Ark project provides this option.
Therefore, there are many reasons to praise the Ark-project and the cooperation with DFDS on the occasion of the current Danish effort to dispose of the remains of Libya’s chemical weapons.

Cooperation between the Navy’s flexible support vessel “Absalon” and DFDS ‘ “Ark Futura” is truly an expression of a public-private partnership that is more than a just a platitude.

By thinking out of the box of the traditional military framework the public-private partnership obtained a defense capability that other nations are paying a lot more money to achieve.

The crew of the “Ark Futura”, along with their military colleagues aboard the “Absalon” rightly can be proud of the contribution they provide under the Danish flag.