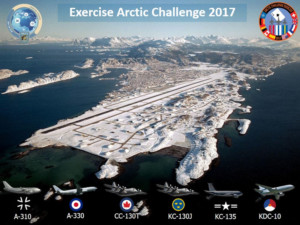 Exercise Arctic Challenge 2017 started on 22 May 2017 and will last until 2 June 2017. Rotating every second year between the three northernmost air bases in the Nordic countries, Bodø (Norway), Luleå (Sweden) and Rovaniemi (Finland), the Arctic Challenge 2017 is led by the Finnish Air Force that is responsible for planning and direction of the training events.

Arctic Challenge is a multinational training exercise to strengthen our partnerships with other militaries in the region. The purpose of the exercise is to practice mobilizing; evaluate aircraft, personnel and fighter capabilities; and train in multinational operations. This exercise is an opportunity to train with our NATO allies and European partners in a realistic environment. The scenarios involve notional, simulated events, as well as combined flying operations between the countries.

Additional to the three Nordic nations, aircraft and military personnel from Belgium, Canada, France, Germany, Great Britain, the Netherlands, Switzerland and the United States will participate. 1,000 people are directly participating in the training with an additional 2,500 support personnel. This year’s exercise will see even more planes than during Arctic Challenge 2015 when nearly 100 aircraft took part. Fighter jets, transport aircraft, tankers, helicopters and aircraft for electronic warfare are all set for take-off over the 10 day exercise period.

Arctic Challenge provides an opportunity to train the large-scale planning and conducting of air operations in a real-like operating environment that involves a wide range of aircraft and forces of modern air warfare. An AAR planner from the MCCE AAR Cell is involved with and responsible for all the tasking and coordination of air-to-air refuelling with 7 tankers from 6 different countries. (CAN CC-130TT, DEU A-310 MRTT, GBR A-330 Voyager, NLD KDC-10, SWE C-130 and USA KC-135) The MCCE AAR Cell also coordinated Air-to-Air refuelling support during the deployment and redeployment of BEL F-16s provided by a Dutch and a French tanker.
The Norwegian Air Operations Centre (NAOC) which is part of the Norwegian Joint Headquarters (NJHQ) in Reitan, has command and control over the operational air assets in a fictitious scenario. All three air bases from where the aircraft will operate, Rovaniemi, Luleå and Bodø are the northernmost bases for fighter jets in the three Nordic countries. The aim is to exercise and train units to plan and conduct complex air operations in close relation to NATO partners. The unique cross-border air space makes ACE a one of a kind training ground for increasing interoperability and skills in all parts of the chain. There are no other places in Western Europe where fighter jets can train over such large areas.

The MCCE AAR Cell has been involved already from the beginning in AAR certification projects to improve the current situation in close relation with the European Defence Agency (EDA), the Joint Air Power Competence Centre (JAPCC) and NATO. In early 2017, the JAPCC organised the NATO Air-to-Air Refuelling Clearance Request/Approval course, a two-day course for Testing, Tasking and Approval Personnel conducted at the European Air Transport Command (EATC) on Eindhoven Airbase. Out of the twelve different types of tankers in the European inventory more than 40% of the required clearances are currently not in place. The MCCE is supporting the AAR Clearance process for its member nations by promoting a common mind-set and a collective approach in order to improve interoperability within the AAR domain. Partly due to the MCCE effort, 5 out of the 18 different missing AAR clearances were solved or temporarily solved for Arctic Challenge since the NATO Air-to-Air Refuelling Clearance Request/Approval Training course. 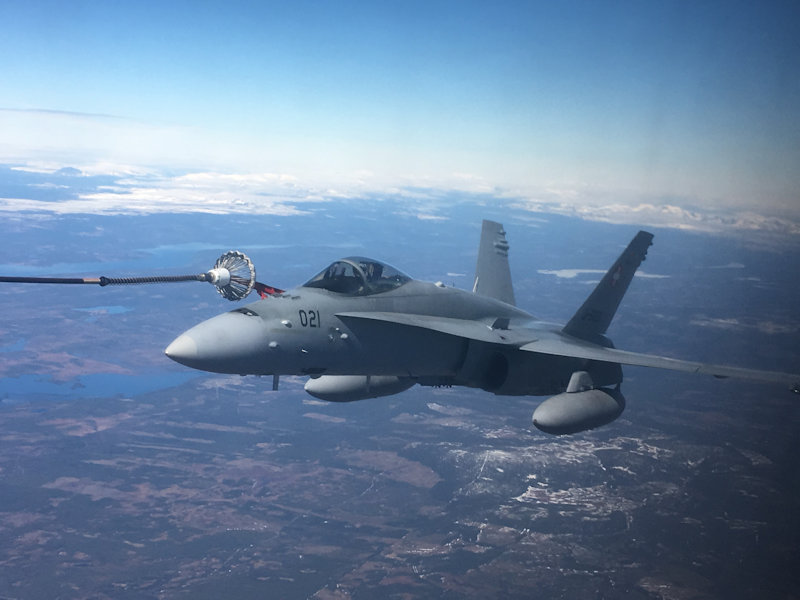 A Swiss F/A 18 refuelled for the first time by a Swedish C-130 tanker.