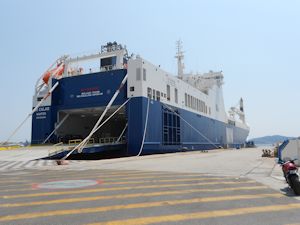 The Sea Transport (ST) Cell was established when the Sealift Coordination Centre (SCC) was reorganized into the Movement Coordination Centre Europe (MCCE) in July 2007.  The role of the ST Cell is to coordinate sealift requirements in connection with exercises, operations and national standard resupply missions.

This task generates a yearly average of around 20,000 line metres (LIMS) being moved.

The Sealift Community is based on an established network of experienced and willing members.

As such, the community is very active and helpful to the benefit of all MCCE members, which is also reflected in many of the matches made.

In order to develop both knowledge and personal relations within the Sealift Community, a 2 week Manager Maritime Transport Operations Course in Rotterdam is conducted when requirements dictate.

In 2020 and beginning of 2021 due to the COVID-19 pandemic the SCC meetings took place virtually only. Hopefully the Sealift community can meet in real life in Madrid, ESP this summer again.

The MCCE ST Cell, in cooperation with the desk officers from DNK and NLD, has developed a Sealift Lead Nation(s) concept for multinational exercises, approaching the commercial market with one consolidated bid, thus maximising capacity and minimising costs.

The concept was tested during Ex TRIDENT JUNCTURE 2018 in NOR. Necessary sealift assets were prefunded by DNK and invoiced after the exercise using a cost sharing model based on distance and volume.

Sailing schedules for the deployment and redeployment as well as movement regulations connected to the concept were created and sent to the participating nations and entities.

Challenges during the planning process were the coordination with SHAPE and the de-confliction of NDDPs together with JLSG.

For Ex COLD RESPONSE 2022 MCCE together with the Lead Nations DNK, GBR and NLD want to make the Sealift Lead Nation(s) Concept a success again.

Necessary sealift assets for CR22 will be prefunded by GBR and invoiced after the exercise using a cost sharing model based on distance and volume.

To overcome the shortfall in Alliance strategic sealift capabilities nine NATO member nations (Canada, Denmark, Hungary, Italy, the Netherlands, Norway, Portugal, Spain and the United Kingdom) signed an agreement to implement the letter of intent, which resulted in the formation of the Multinational Sealift Steering Committee (MSSC) at the December 2003 meeting of NATO Defence Ministers.

Now the issue of a shortfall in Alliance strategic sealift capabilities is more topical than ever. Due to the continuing disruption in global supply chains, there is a growing and strong demand for sea transport. All RoRo vessels are fully employed at increasing time charter rates and for longer durations. T

his results in the rapid change of the market for the types of vessels the military prefers to transport military cargo. Moreover, suitable vessels are not readily available.

Via MSSC NATO member nations have pooled their resources to assure access to special ships, giving the Alliance the capability to rapidly transport forces and equipment by sea.

The MSSC includes now 11 NATO Allies, namely Croatia, Denmark, France, Germany, Hungary, the Netherlands, Norway, Portugal, Slovenia, Turkey and the United Kingdom and provides the Alliance with access to the Sealift Capability Package (SCP), with a total capacity of about 37,800 lane metres.

The ST Cell is operational 24/7 via beneath contact information.